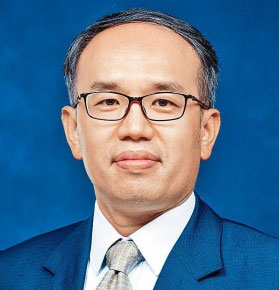 Secretary for Financial Services and the Treasury

Mr Christopher Hui Ching-yu was appointed the Secretary for Financial Services and the Treasury on 22 April 2020. He serves on the boards of Mass Transit Railway Corporation Limited, Hong Kong Airport Authority and also as the Chairman of the Kowloon-Canton Railway Corporation. Prior to his appointment, Mr Hui was the Executive Director of the Hong Kong Financial Services Development Council. He spent 13 years at the Hong Kong Exchanges and Clearing Limited, having been the Managing Director for Market Development and Head of Project Management and also in various senior roles in Listing and Market Development. He also worked for a number of multinational companies in the private sector. He started his career as an Administrative Officer in the Government in 1999 and served in the Economic Development Branch, the Office of the Government of the Hong Kong Special Administrative Region in Beijing and the Home Affairs Department. Mr Hui previously held a number of public roles including Councillor of the City University of Hong Kong, Member of the Mandatory Provident Fund Authority Process Review Panel, Hong Kong Stock Exchange Listing Review Committee and also Hong Kong Institute of Certified Public Accountants Disciplinary Panel. Mr Hui holds Bachelor and Master (Hon) Degrees in Philosophy, Politics and Economics from the University of Oxford, and Master of Business Administration Degree from INSEAD. He also attended the Stanford Executive Programme.