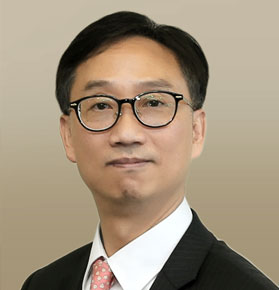 Mr Edmond Lau is responsible for external affairs, monetary management and research. He holds a Bachelor of Social Sciences degree in Economics and a Master of Social Work degree from the University of Hong Kong. Mr Lau joined the Hong Kong Government as an Administrative Officer in 1986. He joined the Hong Kong Monetary Authority (HKMA) in 1997 as Division Head (Banking Development) and had been involved in banking reform and the establishment of the Deposit Protection Scheme. He also served as the Administrative Assistant to the Chief Executive of the HKMA in 2004 after a one-year secondment to the Financial Services and the Treasury Bureau. Mr Lau was promoted as Executive Director (Strategy and Risk) in 2005. He assumed the post of Executive Director (Monetary Management) from 2007 to 2013 when he resigned from the HKMA to pursue further study and, thereafter, take up a leadership role in a non-governmental organisation. Mr Lau joined HKMC Annuity Limited as Chief Executive Officer in 2017, and has been on secondment to the HKMA since 1 October 2019. He was appointed as a Deputy Chief Executive of the HKMA on 1 April 2021.