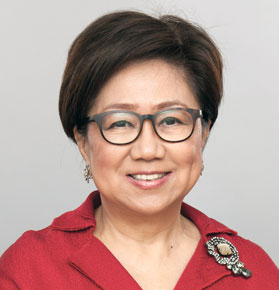 Mrs Cha is a member of the Executive Council of the Government of Hong Kong, Chairman of Hong Kong Exchanges and Clearing Limited and a member of the Financial Leaders Forum. Mrs Cha is an Independent Non-Executive Director of The Hongkong and Shanghai Banking Corporation (HSBC) Holdings plc, the Non-Executive Chairman of HSBC, and a Non-Executive Director of Unilever plc. She is also a Senior International Advisor of Foundation Assets Management Sweden AB and a member of Sotheby’s International Advisory Board. In addition, she is Vice Chairman of the International Advisory Council of the China Securities Regulatory Commission, and a Director of the World Federation of Exchanges. Mrs Cha became the first, and to-date, the only person outside Mainland China to join the Central Government of the People’s Republic of China at the vice ministerial rank when she was appointed as Vice Chairman of the China Securities Regulatory Commission in January 2001. She served in that position until September 2004. Mrs Cha worked for the Securities and Futures Commission in Hong Kong from 1991 to 2000, becoming its Deputy Chairman in 1998. She was also Chairman of The Financial Services Development Council of Hong Kong from January 2013 to July 2018. She was awarded a Silver Bauhinia Star in 2001, a Gold Bauhinia Star in 2009 and the Grand Bauhinia Medal in 2017 by the Hong Kong Government for her public service.