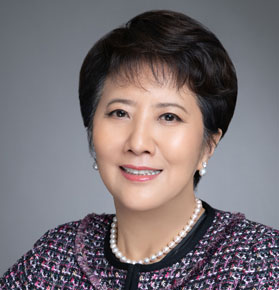 Susie Cheung is the Co-Convenor and a Founder Member of The Asia-Pacific Structured Finance Association Limited (APSA) established in 2006. In her roles as Director of Board of the China Securitization Forum (CSF) and its Executive Secretary General, Susie focuses on promoting the development of securitisation between Mainland China and Hong Kong. At present, Susie is the Chief Legal Counsel and Company Secretary of The Chinese University of Hong Kong Medical Centre.  Susie was the former General Counsel and Company Secretary of The Hong Kong Mortgage Corporation Limited (HKMC), and had served under four successive Financial Secretaries of Hong Kong who, ex officio, became Chairmen of HKMC’s Board of Directors. Susie was responsible for overseeing the structuring and legal documentation of the various debt and mortgage-backed securities programmes. Susie obtained her LL.B. and LL.M. from University College London and is qualified as a solicitor of the Supreme Court of England and Wales and the High Court of the Hong Kong SAR. She was a former Member of the Market Development Committee of the Hong Kong Financial Services Development Council and an Adjunct Professor of the Department of Civil Engineering of The University of Hong Kong. Susie is an Honorary Fellow of the Asian Institute of International Financial Law (AIIFL) and a Fellow, respectively, of The Hong Kong Institute of Directors and The Hong Kong Institute of Chartered Secretaries. Susie received the ‘Outstanding Achievement ­− Asia Women in Business Law Awards 2012’ for her various contributions made to development of the debt market and the reverse mortgage industry. In May 2019, Susie was honoured by the CSF for the ‘tremendous dedication and leadership which she had displayed in advancing and promoting the development of securitization finance in the service of the real economy of the People’s Republic of China’.