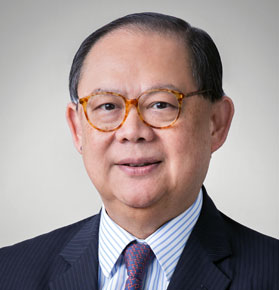 Victor Chu was born in Canton, China and came to Hong Kong at the age of four. He received his early education in Hong Kong and England, and took his law degree at University College London (UCL) where he is now Chairman of the University’s governing council. Mr Chu is Chairman and CEO of First Eastern Investment Group, a leading Hong Kong-based international investment firm and a pioneer of private equity investments in China. He is a Co-Founder and Director of Peach Aviation in Japan, as well as a Board Member of Airbus SE. Over the last 30 years, Victor Chu has at various times served as Director and Council Member of the Hong Kong Stock Exchange, Member of the Hong Kong Takeovers and Mergers Panel, Advisory Committee Member of the Securities and Futures Commission, and part-time member of Hong Kong Government’s Central Policy Unit. Mr Chu has also served as a Foundation Board Member (Trustee) of the World Economic Forum from 2003 to 2015 and currently co-chairs the Forum’s International Business Council. He is Chairman of the Hong Kong-Europe Business Council and Chairman of the Hong Kong-United States Business Council. Mr Chu is admitted to practise law in England and Hong Kong. Since 1982 he has practised in the field of corporate, commercial and securities laws, with special emphasis on regional investment transactions. He served as Deputy Secretary-General of the International Bar Association (IBA) from 1995 to 2000. Victor Chu is a Trustee of Asia House in London and Hong Kong, as well as a member of the advisory boards of Chatham House, the Oxford Martin School and the Atlantic Council of the USA. Mr Chu was awarded the 2011 Global Economy Prize by the Kiel Institute for the World Economy.