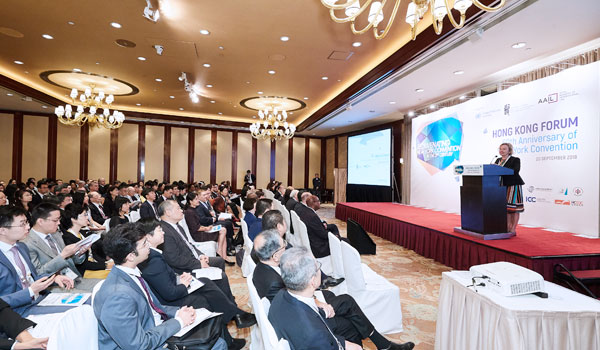 Under the theme of ‘Rejuvenating New York Convention in the 21st Century’, this event was held to commemorate 60 years of operation of the New York Convention by reviewing its application over the past decades. Other than that, the Forum was regarded as a great opportunity to further facilitate the deliberation on the ongoing and heated debates as to whether there was a need for the modernisation of the Convention as well as whether the Convention was flexible enough in order to cope with the new challenges and respond to the unprecedented complexities of the 21st century. The Forum was well attended by a sizable and diverse audience of over 230 participants, composed of scholars, legal practitioners, government delegates and other professional, who served in different professional capacities and came from distinctive jurisdictional, cultural and political backgrounds. The participants conducted engaging and fruitful conversations both with speakers and among themselves on a variety of relevant topical issues.

Implementation of the Madrid Protocol in Hong Kong